Oleksandr Feldman-Romanian government's role in murder of more than 400,000 Jews must be widely exposed


Romanian government's role in murder of more than 400,000 Jews must be widely exposed


More than 70 years after World War II, one would think that few secrets remain from what might be the most heavily researched and examined period in world history.

Each year, however, historians uncover new elements to the scope of horror that defined this era - and in particular the Holocaust. The sheer magnitude of human evil is difficult enough to comprehend, but when one looks at the mass murder of an entire people, it becomes all the more unfathomable.

Descendants of tens of thousands of Jews killed on orders of pro-Nazi regime join survivors in ceremonies marking 70th anniversary of one of single worst Holocaust atrocities. 'Nobody, nowhere can find an excuse nor a justification for what happened in Iasi,' Romanian president says in message

Descendants of Jews killed during the Iasi pogrom in Romania joined survivors Tuesday in ceremonies marking the 70th anniversary of one of the single worst Holocaust atrocities.
At the Iasi Synagogue, Romania's oldest, mourners inaugurated an obelisk as a monument to thousands killed on the orders of the then pro-Nazi regime led by Ion Antonescu, with the complicity of German troops.

"Nobody, nowhere can find an excuse nor a justification for what happened in Iasi", Romanian President Traian Basescu said in a message.

"The Iasi pogrom as well as the tragedy of the Holocaust as a whole is a shocking chapter of Romania's history and should force us to assume our responsibilities for the serious errors committed in the past", said Basescu. 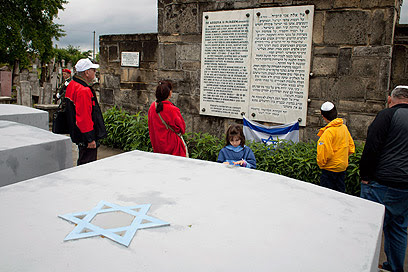 Jewish community members look at memorial stone (Photo: AFP)
Paul Shapiro, director of the Center for advanced studies at the Holocaust museum in Washington told an audience in Iasi this had been "one of the most infuriating massacres" committed during World War II.

"The Iasi pogrom is very important in the history of the Holocaust. It is a mass killing that takes place in the view of the public," Shapiro told AFP.

"So this established for the Romanians and for the Germans as well the fact that it was possible to murder people in front of their neighbors."

The method was later used elsewhere in Eastern Europe during World War II, from Ukraine to Belarus, he said.

"I do not think anyone can imagine the horror of what happened," Leizer Finchelstein, 88, one of the few survivor of the pogrom told AFP. He was 17 when he was forced out of his home.

"I saw lots of bodies in the streets of Iasi, lots of blood in the gutter," he said.

Finchelstein was crammed with hundreds of others into a train carriage. Doors were locked from the outside, all small windows and cracks were sealed and the summer heat was unbearable.

"People died like flies."
Finally, Finchelstein was carried out of the train in a village 20 kilometres from Iasi, Podu Iloaiei. There he had to bury those who had died.

"It is such a sad feeling to see this pastoral landscape, so beautiful, and then to see the mass graves where our relatives are buried", Naomy Almog, a retired Israeli teacher told AFP. She came especially for the ceremonies as her two uncles died in the pogrom.

"In these mass graves, people rest without name. For decades, Romania did not recognise fully the extent of the tragic events in Iasi," added Alexandru Florian, director of the Elie Wiesel Institute for the Holocaust in Romania.

Calling for "eternal vigilance", the American ambassador to Romania, Mark Gitenstein, said "every infringement of liberty" could contribute to a climate of violence in the long term.

Between 280,000 and 380,000 Romanian and Ukrainian Jews died in the Holocaust in Romania and territories under its control, according to an international commission of historians headed by Nobel Peace Prize laureate Elie Wiesel, himself a Romanian-born Jew.
One such example must be the complicity of the Romanian government in the murder of more than 400,000 Jews, the vast majority of them in the villages and forests of the Ukraine.
Among Hitler’s allies, the Romanians are all too often forgotten. Unlike Japan and Italy, Romania wasn’t driven by a global conquest complex. Its motivations for an alliance with Germany were not principled or ideological; they were simply based on what was viewed to be in Romania's narrow national interest. Yet, the crimes perpetrated were no less evil and perhaps even worse than many other nations typically thought of as partners with the Nazis.

In 1939, at the outbreak of WWII, Romania adopted an official policy of neutrality. However the increasing instability in Europe and growing anti-Semitism lead a Fascist political force known as the Iron Guard to rise to power. The regime's policy platform was staunchly anti-communist and ultra-nationalistic.
Members were known for their virulent anti-Semitism. During this period, the growing weakness of Romania’s main territorial guarantors France and Britain became increasingly obvious. The Iron Guard already favored an alliance with Nazi Germany and hoped their alliance would ensure similar territorial guarantees from the Germans.
The result was a tragedy for the Jews of Romania who consequently suffered inexplicable evils at the hands of their own countrymen and neighbors. In 1941, in one (of many) pogroms alone, 15,000 Jews perished in the city of Iasi. The horrific act was carried out by squads of Romanian soldiers and policemen. The Jews also suffered regularly from violent mobs in what amounted to state-sponsored genocide.
The brutality of the Romanians extended beyond its borders and into Ukraine where many Jews fell victim to German-controlled Romanian forces. During the Odessa Massacre in 1941, Romanian soldiers gleefully took part in a gruesome attack against over 19,000 Ukrainian Jews.
The Romanians sought reprisal for a bomb attack they believed to be carried out by Jews. The entire local Jewish community was assembled in a square, sprayed with gasoline and burned alive.
Romania failed to acknowledge these genocidal outrages along with a multitude of similar acts carried out against Romanian and Ukrainian Jewry for over a decade AFTER the fall of communism. Adding further insult to the memory of the murder victims, no responsibility was ever taken for the fate of murdered Jews inside Romania or in the Ukraine during their occupation there.
Until today there remain serious distortions of history regarding Romania’s role in WWII and more specifically the Holocaust. In recent years, only following significant international pressure, did the Romanian government agree to create a panel of historians to investigate their nation’s actions during the Holocaust.
The commission compiled undeniable evidence that implicated Romanian culpability in the systematic murder of Jews. It also found that Romania bore responsibility for the deaths of more Jews than any other German allied country other than Germany itself.
Yet in the face of all the evidence, the clear destruction of communities and loss of life, Romania maintained its innocence. In an attempt to absolve themselves of any guilt or responsibility Romania has consistently laid blame exclusively on the Germans, the Hungarians, virtually everyone else in the area except their own regime and the people who supported it.
Evidence of pogroms and the fact that death trains were dispatched from Romanian cities was eventually, reluctantly acknowledged by the authorities. Even then it was under the guise that such tragedies were not ethnically based and took place because of the communist sympathies of the murdered victims (i.e., Jews).
Tragically as recently as 2003, Romanian officials, including then-president Ion Iliescu, declared that it was “unjust to link Romania to the persecution of the Jews in Europe” and that numbers were being inflated for the sake of media impact. The odd 'academic' revisionist or extremist kook who denies the Holocaust is uniformly ostracized by the civilized world.
Yet, hardly an eyebrow was raised when the national leader of a bona fide nation state essentially denied the Holocaust, or at least Romania's sanguinary complicity in mass murder.
If Romania wants to be a respected member of the community of nations, it must confront and accept the horrors of its past in the same ways as have so many other European governments.
With this goal sharply in mind, we will gather—for the first time ever—on November 9th in Kiev for a Conference to highlight the role of Romania in the Holocaust in Ukraine and other countries of the former Soviet Union.
We will present the Romanian Government with an historic opportunity to address the horrific crimes of their past. Only in admitting guilt will Romania be able to properly commemorate the memories of the victims and establish a new generation of understanding, education and atonement.

2. I agree. Now Israel should recognize 11million not just 6mil